The house was built prior to the 1888 OS map although it does not appear to be on the Rev Frederick Taverner's village sketchmap of about 1857.

It is likely that the THORPEs built the house since it was they who sold it in 1918 and before then there are no other owners apearing on the original deeds.  However, it is clear that the BROWNLOWs were the original tenants.

There were no BROWNLOWs in the village for the 1861 or 1871 census but John and Christina (or Christiana) BROWNLOW and family of six were in the village at the time of the 1881 return and presumably in this house (the entry on the census does not identify the house, only the road/area).  At this time both John and his eldest listed son, Charles, are noted as Blacksmiths.  John was born in Norwell and Christina in Muskham.  According to the census, Charles was born in Ordsall (near Retford) in 1861, then three more children were born in Newark (up to 1870) and the last two in Coddington (from 1874).  This would suggest that it's likely that the family moved to the new house when it was built sometime between 1870-1874. 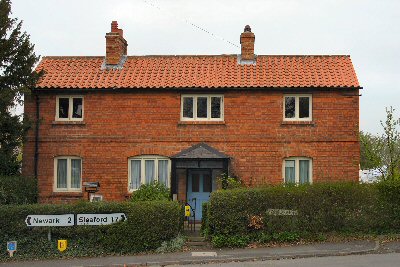 The house was Lot 37 in the 1918 sale with the description:
"A substantial Modern Dwelling House situate on the north side of the Main Street in Coddington Village, together with Blacksmiths' shop farm premises and garden thereto.  Tenant - Mr John BROWNLOW.
The house is brick and tiled and contains - Sitting Room, Living Room, Three bedrooms, and Store Room, Kitchen, Pantry and Dairy.  Blacksmith's Shop and Shoeing Shed, Cow House for three, Chaff House, Pigsty."

From the 1918 sale, the house was bought by George Henry HOUGH for £300 - along with two other lots.  The HOUGH family stayed at Brownlows House until selling it to the DAYBELL/HANDBURY families in 1967 who in turn sold it to current owners in 1989.  At that time mail arrived simply addressed to "Eva HANDBURY" or to "Brownlows House" or "The Cottage" (which was the property name on the sales particulars).  Since there was at least one more 'The Cottage' in the village, the new owners re-adopted the Brownlows House name, although accepting it being rather a liability for reading to people!

The main house is largely unaltered, although relatively recently a bay window, in-keeping with the porch, has been added to the east gable.

Of the outer window frames in the house, three are still completely original and the others are substantially untouched.  When some of the opening windows needed to be replaced marks from the original joiners were discovered, detailing traditional Roman numerals - used to indicate which piece fitted where.  Some also had “Brownlow’s” written on them. 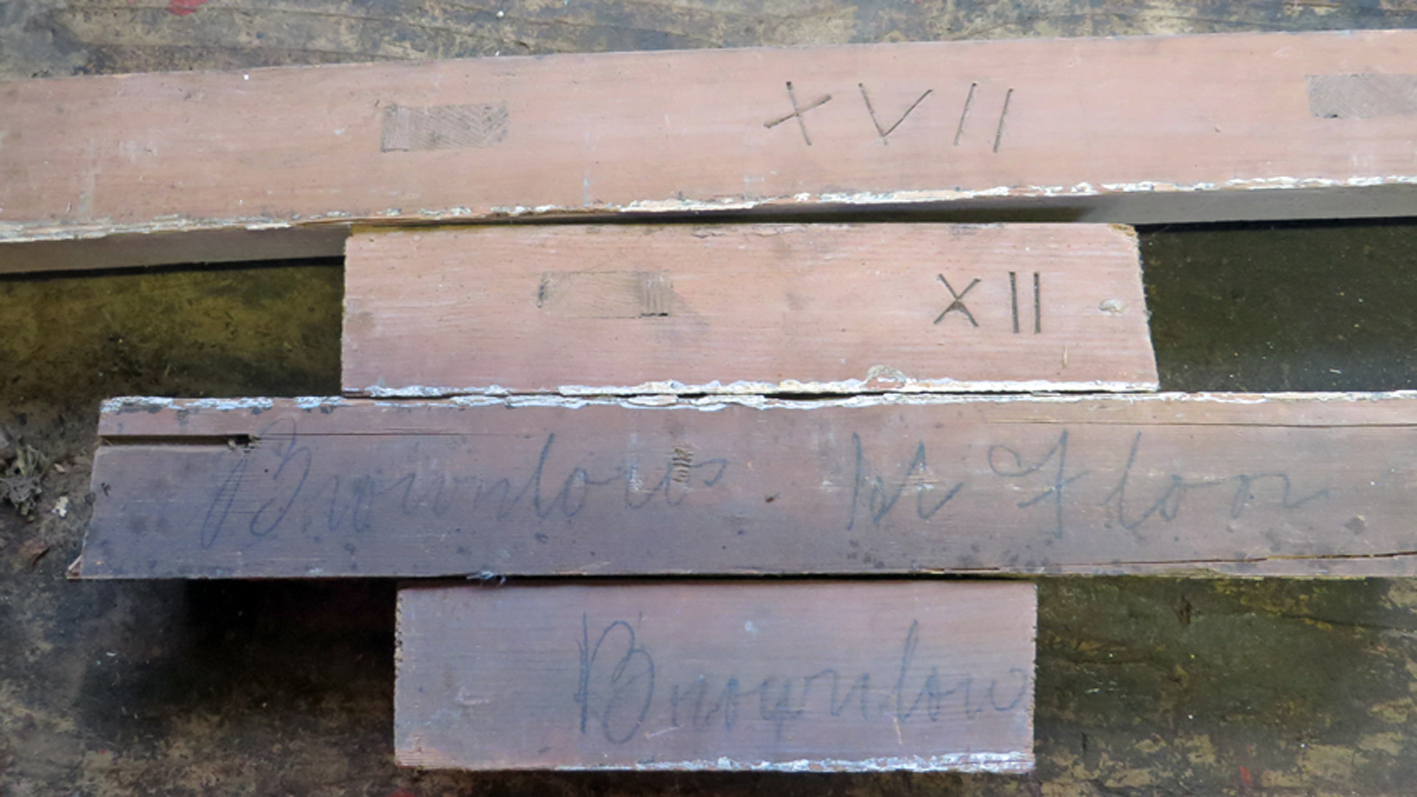 The decorative wooden front porch has had to be heavily restored - a labour of love involving complete dismantling prior to careful rebuilding.  Mary LUKEHURST née HOUGH, (from "Ardbrecknish" on Balderton Lane and granddaughter of George Henry) recalled that it was created from the conservatory at Coddington Hall.  Her father and grandfather were the contractors who demolished the hall and recycled the timber.  It was also used to form the bay windows of the pair of semi-detached houses on Newark Road, almost opposite Lancaster Road.  Until around 2001 the left hand ("Ardfern") house's bay window was extant and obviously related to the Brownlows House porch.  But when the bay was eventually replaced there was only a small amount of the dogtooth decorative horizontal wooden band left visible at the junction of the two houses.  Sadly, no evidence of this now remains.

Mary LUKEHURST was brought up in one of the semis, her father was Harry HOUGH and his brother Herbert Edwin (known as Ted) lived next door.  The land on which the two semis were built was another of the lots which GH HOUGH purchased in 1918 (the documentation exists in CHG archives). (Note: Harry HOUGH worked for the THORPEs and Col. THORPE owned a large house at Ardbrecknish in Argyll, confirmed by comments in the school log). 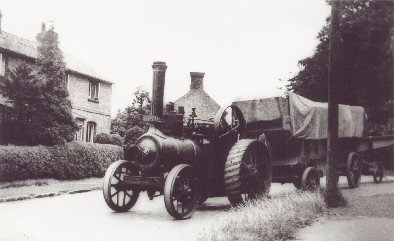 On the north-side of the plot there are two brick and pantile outbuildings abutting each other with a valley gutter between.  They were in poor condition in 1989 and the previous owners had considered demolishing them.  The building nearest the house has a blacksmith's forge which has since been restored with a new smoke hood added.  The other building had evidence of tethering facilities for animals (the shoeing shed).  The floor is mainly brick with a gully to facilitate animal housing.  In 1989 it had the remains of a corrugated iron roof.  The forge buiding had clay pantiles and these still feature on the south slope along with some original glass pantiles.  The other slopes, being difficult to see, now have reused concrete pantiles along with a skylight recycled from former bathroom use.

The two buildings were not constructed at the same time, nor of a piece since there is obvious evidence of several phases involved.  They are probably older than the house.  The roof trusses in the outer building are obviously reused - they do not fit at all well!  In the forge building one of the trusses has been repaired by the owners and the other two were more recently constructed of reused timber - installed to restore stability to the strucure.  Many of the smaller roof timbers have been similarly renewed.  It is possible that the forge building was in fact the original house.

In the garden there are the foundations of another small brick building but probably not of early construction, the bricks being laid in stretcher bond.  There were also signs of a path which Mrs LUKEHURST said was once part of a chip shop on the site.  When the current owners bought the house there were the rusty remains of a petrol pump in the garden – now safely in store (but still rusty!).  It was deemed sensible to discover and remove the petrol tank which proved to be a 500 gallon cylindrical one, rusted through and empty.

The house plot has now changed shape from the original where it extended much further north and there was a large brick building (demolished c1970) used in connection with the BROWNLOWs/HOUGHs agricultural business.  The plot was also originally narrower and vehicle access was adjacent to the east gable of the house – giving a straight access to the extra land behind.  The DAYBELL/HANDBURY family also owned the terrace next door and some of the land from Post Office Row was incorporated into this plot.  The land behind was sold to Mr BECKETT the builder and has since had eight dwellings built and been named as HOUGHS YARD.