The Wesleyan Chapel and Chapel School

Most of the information we have about the Chapel and Chapel school comes from deeds and 19th century trade directories. We have a number of pictures of floats in Chapel Parades and a few accounts of chapel social activities. We would love to hear from anyone else who remembers Coddington Chapel, or chapel-characters. 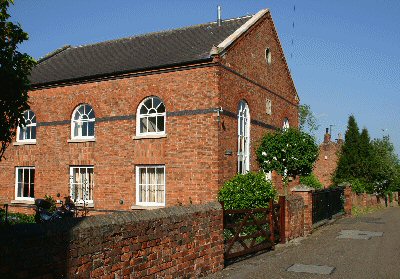 The earliest meetings had taken place in private houses. In 1828 a group of business men from Newark and Coddington bought land for building a chapel from Edward Young for £5. By 1844 the Methodists had attached a Sunday school to the Chapel with up to 130 children attending. An 1848 Trade Directory informs us that the two services (at 10.30am and 6pm) were taken by “Circuit Preachers”.

By the middle of the 19th century the Wesleyans had made great progress in the village, and the Church of England (with its decaying church building and the Parish annexed to East Stoke) felt under great pressure. (A new, energetic progressive force also arrived in Coddington in 1843, when young James Thorpe inherited Beaconfield House from his father - who had bought the estate around 1840.)  Discussions also led to the formation of a separate parish in 1860 and the almost complete rebuilding of All Saints Church in 1864-5.

The Chapel and Church sit opposite each other only yards apart and were rivals in a very real sense. In the 3 year period 1858 to 1860, 23 out of a total of 59 baptisms in Coddington were in the Chapel. The Methodists also wanted to enlarge the chapel - a further 414 sq yards was bought from John Young for £62 2s in 1858, and the Wesleyan Methodists rebuilt the chapel in 1865 at a cost of £400, to hold 170 sitting.

An 1879 trade directory reports that the Wesleyan Chapel held services at 2:45 and 6pm; and that Mrs Marshall was the Chapel Keeper. The 1881 Census lists two Marshall households: Charlotte Marshall aged was 75, landlady to 29 year old schoolteacher John Pilgrim, living on the Green; and Robert Marshall and his 50 year old wife Martha Marshall.

The Chapel Day School
The Church of England Day School was built in 1846. The Methodists now wanted their own day school – which was built of brick in 1858 for up to 80 pupils. (NB An 1879 directory says the school was built in 1865.)
By 1864 Mary Hollidge, assisted by 2 teenage pupil-teachers Sarah Ridley and Mary Fearfield, was teaching 40 pupils - almost as many as the 50 at the rival school. Mary A Hollidge appears on the 1861 Census as a 34 year-old spinster from Middlesex, lodging in a household consisting of herself and 73 year-old retired schoolmistress Maria A Phillips (from Westminster). In 1861, 16 year old Mary Fearfield lived with her mother and brother on Main St (next to the Dalton family on the corner of the Green).

The 'Squire' James Thorpe, a generous benefactor to All Saints Church, favoured the rival Church of England school, which after Forster's Education Act became the National school in 1872. Both schools were subject to government inspections, and although John Robert's National school logbook reveals his difficulties, the MethodistSchool was even more heavily criticised. School funding was partly dependent upon attendance figures and partly on results in the '3Rs' and inspector's reports. Inspectors were often clerics or gentlemen with a classical education. Their views about what information and skills should be taught were likely to be idiosyncratic. Their class and religious sympathies were also less likely to coincide with attitudes in a low-church school.

Funding was also unequal. By 1885 Birche's charity farm was raising £126 110s 6d, £50 of which went to the National School and £20 to the Wesleyan school. The schools were competing for funds and pupils, and both were competing with the families needs for their children's time, labour or earning power. Parents could also threaten to transfer children to the other school when they were in conflict with either head or with the attendance officer.

In 1891 the Trustees, including Edward Young met to see if the school should be given up. The board of management including Joseph Smith and William Lee carried on for another year at a financial loss - caused by strong competition from the National School. In July 1894 they failed to win a grant from the Wesleyan Education Committee and closed in April 1895.

The Chapel in the 20th Century
Trade directories of the early 20thC say very little more about the Chapel – apart from that it will seat 250 (from 1912 onwards). There is no indication in the directories that there has been either an extension to the 1865 premises, or a refurbishment to account for the apparent seating increase.
Coddington History Group has no printed information about the nature of services at the chapel, or about people who preached there, who held the keys, or who helped decorate, maintain or clean the chapel. The Chapel Baptismal register was preserved in Nottinghamshire Archives, and we have a transcription of the entries between 1856 and 1925
By the late 1970s running costs of the chapel had mounted and the congregation reduced to a few. In 1980 the Chapel was converted to a private home.
Memories of the Chapel and Chapel Activities:
We have a number of pictures of floats in Chapel Parades and a few accounts of chapel social activities. We would love to hear from anyone else who remembers Coddington Chapel, or chapel-characters. You can read more village memories in the People/Oral History section of the website.
Marjorie Raynor of Mill Cottage, off Balderton Lane.
“We went to Sunday School at the Methodist Chapel. Mr Harold Taylor was superintendent, he lived in the cottages on the right hand side of the road opposite the Old Forge. Mrs Colly lived next door. As we passed Mrs Taylor would call us in and take down the biscuit barrel that was full of sweets and offer us one, then we walked on to Chapel.
We had an anniversary each year and you either sang or did a recitation on the stage. The chapel was packed.
We had a celebration day, races and all sorts. The ones we enjoyed jost were when we went to town on Mr Taylor cart. The sweets were ordered at Woolworths and we would pull up outside and each child was given a bag of sweets.
I was in the choir at Chapel and sometimes went 3 times on a Sunday. Mum used to sit at the back of the chapel and I remember one day we had a preacher and he stuttered and my friend and I were very naughty and couldn’t stop tittering and my mother came and fetched me back to sit with her. It really was very naughty but we had never heard anyone who stuttered.”
Mavis Kirton, of Sunnyside Cottage
“I used to help with Brownies at Balderton, I was one of the first Tawny Owls. Mrs Furniss was involved with Brownies and Cubs. I belonged to the Girls Friendly Society attached to the church and the one attached to the Chapel! But I used to go on Parade with the Chapel. They had a Scripture Quiz and I came 2nd or 3rd. All the girls around us were Chapel, so I waited to go with them to the Chapel things. They didn’t come to Church Youth Group 14-20’s.”
Charlotte Hackett, nee Hall
“Once a year there was a Methodist Feast. The Daybells brought a horse and trap and took the children riding through the village, and then took them to his home for tea.
There was also a Methodist Feast Outing. All the churches in the area would parade around the village in beautifully decorated carts, meeting in Newark. It was always held on a Thursday. One man who always went to this parade was ‘Coaly’ Taylor (Christian name unknown) always known as Coaly. He was the coal man and also a lay preacher.”