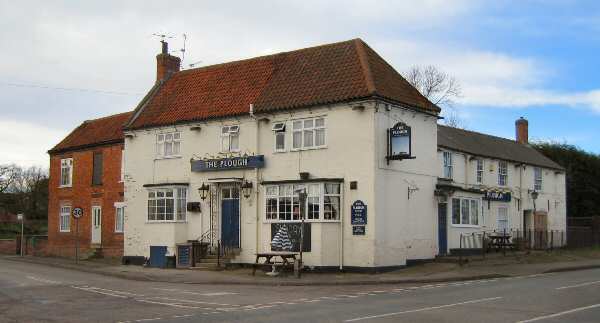 It is not known when The Plough was built or who its first publican was but the inn has been serving pints to villagers for well over 200 years.

The earliest reference we have to The Plough is from an advertisment carried in the The Lincoln, Rutland, and Stamford Mercury across Oct and Nov in 1805.  Part of the advert copy includes reference to "Mr. John HARWOOD, who keeps the sign of the Plough, at Coddington".

John HARWOOD died on 23rd Mar 1810 leaving his widow, Rosamond, to continue until later, in 1812, there is a marriage report in The Lincoln, Rutland, and Stamford Mercury of Friday, 19th Jun 1812 saying "On Friday se'nnight, Mr. [John] RENSHAW, farmer, of Bathley, to Mrs. [Rosamond] HARWOOD, of the Plough public-house, Coddington, Notts."

Subsequent to this, a handbill still exists detailing the house of Mrs [Elizabeth] BIRKETT being auctioned "at the house of Mr Leeson SLIGHT, at the sign of The Plough, in Coddington" a 5.00pm on 25th Jan 1820..

The INGRAM family; first Thomas and then his widow, Mary, kept this pub throughout the period between 1869 and 1912.

They had come from Caunton and baptised their sons; Fred in 1868, Roland Scott in 1872 and John Thomas in 1873 in Coddington Church.  Vernon's book about The Victorian School records that both Roland and John gained refunds for passing three subjects at school during the period 1873-1877 whilst Fred gained a good attendance award during the period 1878 to 1882.  In 1900 Fred was described as a cottager and at the time of the 1918 Estate Sale was a tenant of one of the cottages on Main Street (Lot 49 and since demolished).  In 1935 John INGRAM applied to the Duke of Newcastle to convert property (a house orchard and garden) from copyhold status.  Between 1938 and 1950 John was listed as living at "Fairfield".  By 1957 Florence E INGRAM was the only INGRAM listed.  She was living at 68 Main St, where Fred had been living 40 years earlier (see lot 49 on map below).

The Plough building survived major road realignment when the (old) A17 was driven across Newark road and through the centre of the village from Beacon Hill.  The road passed between The Plough (in blue) and 39 Main Street (shown red).  The buildings between were demolished sometime between 1919 and 1946. 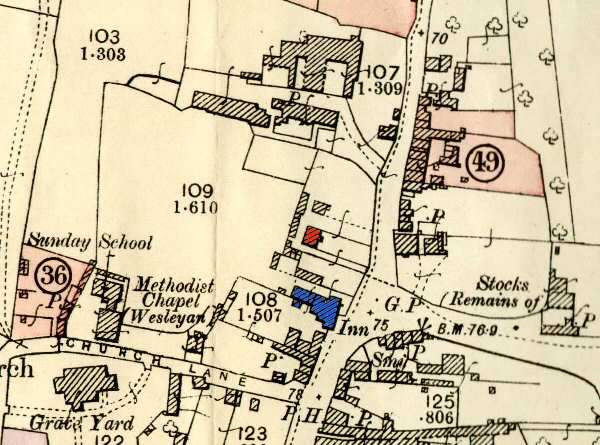 We have records of HENTONs in the village from the 1840s; two HENTON households appear on the small surviving part we have of Rev Frederick TAVERNER's 1863 village sketchmap. In 1883 Emily HENTON was appointed as sewing mistress when Joseph Chauntry HUNT became headmaster - she married Samuel PARKES shortly afterwards and they later kept the Red Lion pub. Two HENTONs; Alfred and John, both living on the Green - were amongst villagers killed in WWI.

Can you help us to list the names of more recent tenants or bar staff?